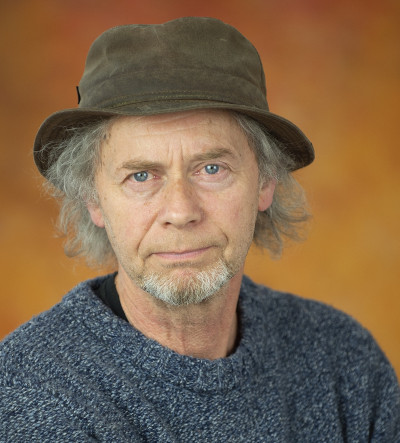 ‘It is one thing to look at a wave but it is quite another to get inside of It. If such a delving can be achieved, then it frees up the mind and imagination to explode with all the turbulence and even peacefulness that is inside our own minds. This wild environment provides us with a channel to open our minds and express and discover areas within ourselves that we never would have thought we possessed.’

John Jermyn lives on the edge of the cliff at Fennell’s Bay, Crosshaven in County Cork, Ireland. This proximity to nature has nurtured in him a fascination with landscape – the power, atmosphere, and mood that the seas, waterways and coastlines inspirit and generate.The paintings explore different aspects in contrasting settings varying from tranquil shorelines or a still canal to raging high seas, initially allowing a glimpse of its subject but then encouraging the viewer into something else, something bigger.

Over the years, he has gained a deep understanding of the Irish landscape, its people and its past. This understanding has created a highly individual painter who is held in high regard by those who are familiar with his work, which is becoming increasingly well known. John’s proximity to nature’s elements provides him with the purest form of inspiration.

“Jermyn’s s use of brilliant orange into red, which is common through many of these works, provides a strange twist. This use of colour could be described as supernatural but it curiously pulls the observer closer in to the painting and then beyond.”

John himself, considers that working and exploring with this vibrancy in colour creates even greater opportunities to explore a subject. It lands one right in the middle of expressionism.

“The raw beauty of nature is constant, thereby enabling us all to link both past and present. It is my wish, that my work identifies with this and thus increases our awareness to appreciate, preserve and protect this environment.”

‘Looking Back’, a painting by John, was chosen as the flagship image to represent a joint effort project, named ‘Journey Towards Healing’,  formed by a collective of faith based groups throughout Northern Ireland. This project was funded by the Victims’ Unit, First Minister and Deputy First Minister, Stormont Castle, Belfast. The Victims’ Unit would work with a group representing faith communities to produce a resource that would support those working with victims and survivors of the troubles.

The aim of ‘Journey Towards Healing’ was to establish trauma advisory and support panels across Northern Ireland in order to develop partnerships in a range of areas relating to victims and survivors. The painting ‘Looking Back’, has been used widely throughout the project. It has received a positive response by all, as it has reflected and captured, be it in a simple fashion, the effects of the troubles.

The image has since been used as a representative symbol at International Dialogue conferences around the world, relating to trauma and support, in other war-torn and troubled regions.